A mole, as it pertains to skin, is a growth on the skin that are typically black or brown in color. The discolored bumps can grow anywhere on your skin. They can be isolated with smooth regular skin around them or they can be clustered together.

Moles generally appear during early childhood. And if they appear later, they usually show up during the first 25 years of a person’s life. Many people have 10 and as many as 40 moles by the time they grow out of their teens and become adults.

Moles will change over time.. They can be flat dots that become raised. They can also change color. Hair can also develop in them. Of course a mole won’t necessarily change. It may stay the same for many years. Some  moles will disappear over time.

(A mole is also a blind burrowing animal, but this site is not about them.)

Moles grow when skin cells come together in a cluster. These cells are called melanocytes and they they produce the pigment that gives skin its color. Moles will often get darker after they are exposed to sunlight. They may also darken during one’s teenage years. They can also change color during pregnancy.

What types of moles are there?

What is a “congenital nevi” type mole?

Congenital nevi are the type of moles that are present at birth. They show up in about one in 100 babies. These moles are more likely to become cancerous (melanoma) than moles that grow after birth. A mole or darkened freckle is bigger than a pencil eraser. Or if they have any characteristics of the ABCDEs of melanoma (see below). 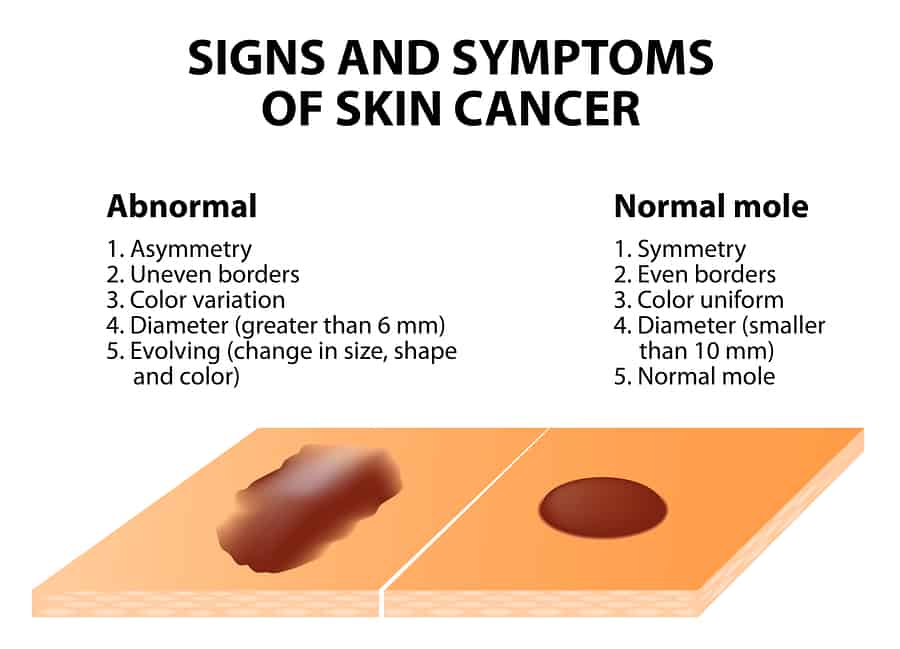 What is a “dysplastic nevi” type mole?

Dysplastic nevi are moles that are generally larger than normal (larger than a pencil eraser) and unusual in shape. They can have uneven color with dark brown centers and lighter jagged or curvy edges. They are more likely to become melanoma. People who have 10 or more dysplastic nevi have a 12x higher chance of developing melanoma, a serious form of skin cancer. Any changes in a size, shape or color of a mole should be checked. See your doctor or dermatologist to ensure that a mole is not problematic and has become skin cancer.